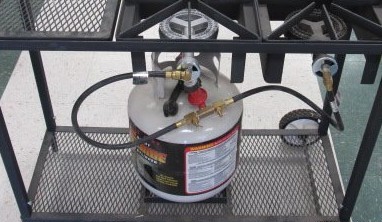 Contact Us
Propane storage in salt caverns is very ideal because salt is impermeable, so the gas cannot escape. The walls of a salt cavern are strong and impervious to gas over the lifespan of the storage facility.

How is Propane Stored in Salt Caverns?

To receive and store propane, the cavern is completely filled with salty brine. As propane is injected, brine is forced out and stored in adjacent brine ponds or sent to the plant for salt production. This is why we see so much propane storage in salt caverns.  To remove propane, the facility operator re-injects brine to force the propane out. Propane is lighter than brine, so the brine inside the cavern resides as a separate layer below. Salt Caverns are formed from existing salt bed deposits. Most of the salt domes are found along the Gulf Coast. The cavern is man-made by drilling a well down into the formation, and pumping water through the completed well to dissolve the salt which returns to the surface as brine. The walls of the cavern are very resilient against reservoir degradation.

Where are Salt Caverns?

Why is Propane Stored in Salt Caverns?

Underground storage of propane, butane and other profitable natural-gas liquids that bubble out of crude-oil and natural-gas wells is a common practice in the United States. Hundreds of millions of barrels routinely are warehoused as pressurized liquids in caverns until they can be sold.

It is perfectly safe to store propane in salt caverns. Propane does not leave a residue and is essentially harmless to soil, water and surrounding wildlife.

Contact Us
This entry was posted in Propane Energy and tagged Propane, Propane Storage. Bookmark the permalink.